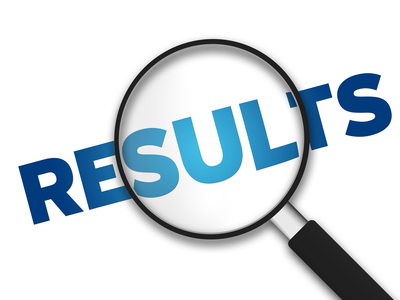 For starters let’s just say the results were…..  successful to a degree but also a little mixed and confusing.  We spent $15 and it did seem to reach a lot of people.  From that standpoint we feel like we got what we paid for, but there are plenty of discrepancies in the numbers.  Sure there is a chance I’m just not understanding them completely but I think I’m a bright guy and if I can’t figure them out then I’m guessing I’m not the only one.  The engagement level was not quite what I’d expected either but I think there is a learning opportunity there. 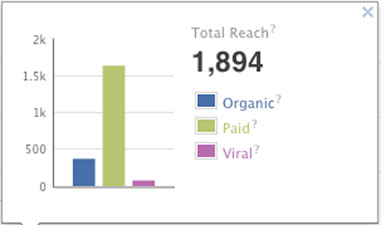 First let’s look purely at the number of people the post reached.  Above is the graph that breaks it down into three categories.  When we selected the $15 dollar (highest) option it indicated that the reach we were paying for would be in the 2.5k – 3.5k range.  When I hover my cursor over each category the organic (people who like the page and either clicked on it themselves or had it appear in their news feed before I started the promotion) shows 372, the paid shows 1637, and the viral (people who saw it as a result of a friend liking, commenting on, or sharing the post) shows 76.  By my math that adds up to 2085 – not 1894 and still way short of the estimate I was given.   However…. 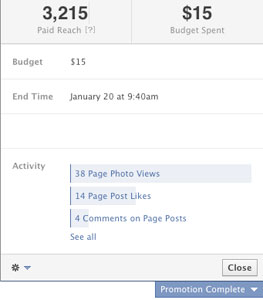 They also provide a promotion summary where I’m told that the paid reach of the post is 3215.  Uh…. okay….  so which is it?  1637 or 3215?  If 3215 is the number then I’m pleased with the reach.  We had about 940 people following our page at the time and we promoted this to our followers and their friends so if $15 bought me 3215 people seeing this post I’m good with that.  Side note: I have since found out from a friend who manages a page with a much larger following than ours that it would cost them much more to promote a post – facebook charges considerably more to a page with 100,000 followers than they do to a page with 1000  – like hundreds of dollars instead of $15.

So far we’ve looked at the pure mass numbers of people reached.  Now let’s dig into how the people who saw the post responded to it.  First we’ll look at engaged users: 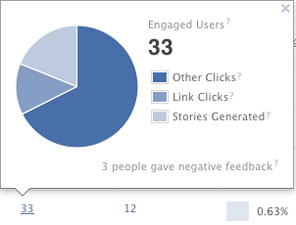 There were 33 engaged users (number of unique people who clicked on the post), 50 other clicks, so there were people in that group of 33 who came back to the post and clicked on it more than once.  There were 10 link clicks – this was a little disappointing since I thought that the thumbnail of the damaged photo of the tent in Vietnam would compel people to check out the link.  14 stories were generated (likes, comments, shares) and only 3 out of thousands hid the link (negative feedback) which is nice – it didn’t turn people off.  Overall not huge numbers of engagement.  This also doesn’t tell me what kind of collective impact the post had by showing up in thousands of news feeds, but I suspect that there was some impact that I can’t measure immediately.  We don’t typically advertise and I’m not an expert in open / click through rates etc. but I do know that when I promoted this our engagement level was over 1.5% and it ended up at .63%  When I promoted the post it had met the criteria for Jay Baer’s STIR strategy for when to promote a post which includes waiting 6 hours to promote and only if the post has over 1% engagement.  I may raise that to 3% going forward especially if it proves to be true that there will be a natural drop off in the percentage engagement once you send it out to people who may not be familiar with your brand.  The last graph of data they give you is the break down of the “stories generated” or people “talking about this”: 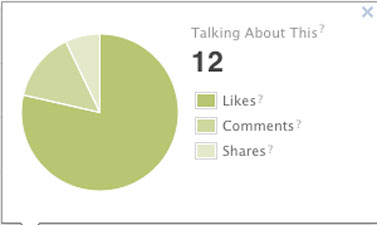 11 likes (even though the earlier summary says 14), 2 comments, and 1 share.  I think it’s great when someone shares a post because the post then reaches a whole new audience.  One share isn’t much, but it’s better than a sharp stick in the eye.

So as I mentioned before I would say the results on this one were mixed.  The confusing numbers are a little troubling – even if it’s only $15 dollars I at least want accurate numbers.  Facebook is a public company now and these tools are part of the ways they are trying to generate revenue to show Wall Street they can be profitable, but they should clean up the data if this is so critical to their future.  As for whether we would promote again?  I would say yes but still very selectively.  This one while not a complete flop was not a home run but that’s okay – they aren’t all going to be home runs.  That’s on us to make sure we learn what content has the most value and appeal for our followers.

Have you paid to sponsor or promote a facebook post?  What kind of results have you seen?